Mistress Gaia and her pony fetish

Mistress Gaia loves ponies even if she does not own one. She instead has a human pony which she uses for a variety of things. Today she felt like riding it and she did. The human pony was exhausted and in a lot of pain from what he did to it. She rode it for long and at times she whipped it when it did not do as she wanted.

This mistress only cares about results. As long as she has positive results on her table, she does not care about anything else. This loser had posted impressive results for two quarters and she was not happy with him. She did not want to risk a third consecutive poor quarter for him so she motivated him by whipping him and riding him like a human pony. She let him know he would only have himself to blame if he posted poor results.

These mistresses did not like what this guy had done to them. He had been spreading lies and rumors about them and they did not want to let him get away with that mistake. The mistresses got him naked and they rode his back like a pony. He was in a lot of pain and he had to beg them to forgive her and promised to make things right and correct the lies.

Lady Ambers was tired of her slave always having an excuse for whatever wrong he did. She had to make him learn to take responsibility so she cruelly rode him like a pony. She turned him into her human pony and enjoyed riding him for hours. He was tired and he collapsed on the floor but she did not care. She whipped him and he got up and continued carrying her.

Mistress Celine wanted to try a new way to punish her slave. She felt that he had gotten used to her old methods and they were no longer effective. So she turned him into a human pony and rode him. She whipped him and did all the things guys do horses and had fun torturing him. He could only beg for mercy but she did not pay any attention to what he said. 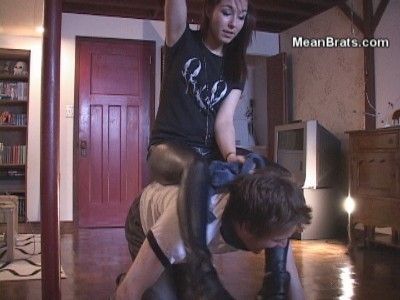 Mistress Gaia has always wanted to ride a pony. But she has never owned one and so her best chance was riding her slave like one. She rode him in the house and she carried a whip to make him go faster whenever she felt his pace had reduced. She had a great time doing it and did not care what her slave was going through by turning him into a human pony.

Mistress Amy punishes slave by riding him like a pony

Mistress Amy was tired of her old punishment methods and she chose to look for a new one to use in punishing her slave. She chose pony play. She rode her slave like a pony and enjoyed torturing him for fun, She was heavy and he could not carry her for long. But she did not care. Mistress Amy had a whip ready to whip him whenever he slowed down.

This mistress and her husband love to do all sorts of naught and interesting things. It is why they are very close and why their sex life is not boring. Today she wanted to ride him like a pony so she did. He did not object to it and she even took coffee as she rode him. He told her to ride her in bed when she was done riding him like a pony.

Mistress Gaia and her friend wanted to teach this guy a lesson. They had caught him being nasty to his own wife and they had to come to the defense of the wife. They laid a trap for him and when he fell for it, he was beaten like never before. He was whipped while naked and the mistresses rode him like a pony. He was told never to be nasty to his wife again if he did not want to experience worse than he had already experienced.

Princess Serena likes obedient slaves and her new slave was not. She was not going to let a slave be disobedient to her so she punished him. She had always wanted to ride a pony but since she did not own one, she used the slave as her human pony. She forced him to carry her all over the house and she even whipped him when she felt he was not going fast enough. She nearly broke his back with her weight.