Mistresses tie slave and dominate him like human pony

When mistress Michelle and lady Sandy felt that this loser needed to be punished as he did not clean the stable properly, they chose pony play as their method of choice for his punishment. He was humiliated by the mistresses as they tortured him painfully while naked and they made sure he would never do anything of the sort again due to what he felt as he was being punished.

This mistress wanted to punish her roommate so that she did not take her for granted. She made her roommate strip naked before she carried her all over the house. The mistress had a whip ready to lash out on the roommate if she did not carry her for as long as she had directed her to do without any rest. She got what she wanted from the roommate and they never had any issues thereafter. 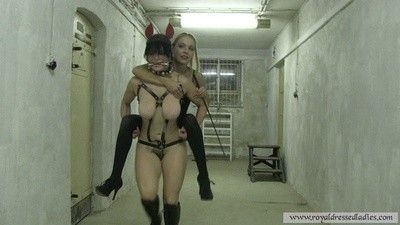 Mistress rides slave all over the house

This mistress was out to punish her slave and she did it in spectacular fashion. And this was because she felt that she needed to teach him a lesson. So she rode him like a human pony and he had no choice but to carry out her orders. When he did not obey her orders, she lashed out at him with a whip and he did what she asked of him.

Mistress Alice knew that the best place to torture and to dominate her human pony was in the woods. And that is why she chose to torture the human pony and get it to stop being a source of stress for her. She degraded it and she forced it to carry her on a dirt road making it hard and painful. The human pony cried but those cries were music to her ears.

This mistress had to punish her boyfriend in a way he did not expect. He expected silent treatment or a slap. But that is not what she did. She turned him into a human pony and she forced him to do things her way. He carried her on his back and she was heavy. She almost broke his back as she did not want to let him get any rest.

Mistress Courtney saw videos of people riding their horses and ponies and she felt like she wanted the same. But she did not have a pony and so she used her slave who she turned into a human pony. He did not have a say in the matter and despite his objections, she did it anyway. And to make it worse, she rode him and whipped him while he was naked.

When this ponyboy was asked to get involved in pony play, he did not want it and that is how he pissed the mistresses. They had to punish him and make sure they did it as cruelly and as painfully as possible. The poor guy was turned into a human pony and they rode him all over the stable and he was in pain from it. But that was not all as they also whipped him.

Madame Marissa had a human pony which was stubborn and it gave her a headache. She did not want to put up with such a human horse. So she used her boots and a whip to trample and cane it respectively and it worked wonders as the human pony changed and became as good as she wanted it to be. She enjoyed riding it until she felt it was enough for the day.

When this mistress wanted to try pony play, she knew she had to find a way to entice a loser to be her human pony. So she used her big tits and her sexy ass to tease and flirt with this guy. In no time, he had agreed to be her human horse and he carried her around the house as she talked dirty to him to make him go on.

Mistress Jane wanted to try riding an old human horse. So she climbed it and she whipped it and it carried her for a few minutes before it got tired. She did not let it go. Rather, she got it to carry her some more by whipping it. It was fun for her but an absolute nightmare for the human horse which had to endure pain and torture as she did her thing.